The New York Chapter will host to the 2019 National Conclave in Tarrytown, New York.

We are bursting at the seams with pride for the visionary leadership that our New York Girl Friends demonstrated in 1927 as they laid the groundwork for our wonderful organization. The New York Chapter is dedicating our 2019 Conclave in honor of the legacy of Eunice Shreeves, our Founder. As we count down to 2027, 8 years from now, we will commemorate over 100 years as the New York Chapter of Girl Friends. What a Centennial! What a party!

And speaking of a party, let’s all get in a New York State of Mind celebrating iconic New York City landmarks and institutions as illustrated through our conclave artwork and executed in our conclave activities. Thursday night we’ll bring you a touch of Sweet Harlem; Friday night we’ll get casual with the flavor of Central Park and let’s go to Broadway on Saturday night! And in between everything we’ll sprinkle in a little New York flavor.

We are honored to host and entertain you as we celebrate our joyous friendships. By the end of Conclave 2019 you will join us in saying, “Mission Accomplished.” 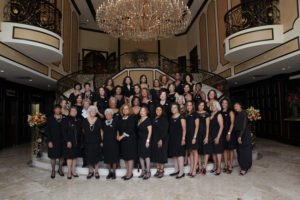