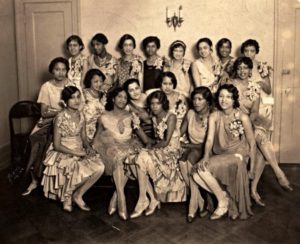 In the summer of August 1927, Eunice Shreeves invited four close friends to her New York City home.  She envisioned forming a social club to maintain the friendships they established that year. Henri Younge, Lillie Mae Riddick, Elnorist Younge, Thelma Whittaker and Eunice would be away at school for most of the year, but felt formalizing their club would reinforce their friendship. The historic meeting was held over a “Pot of Stew” and the young women quickly agreed on the direction of their group. Lillie Mae suggested the name “Girl Friends” from a popular song at the time.  They selected club colors of apple and emerald green, a club flower, the Marshall Neal Rose (now the Tea Rose) and identified like minded young women for recruitment.

Ruth Byrd, Constance Cottrell, Helen Hayes, Rae Dudley, Anna Murphy and Dorothy Spraggins Roarke were among the first to join what became the “mother chapter.”  These distinguished women remained life long members, witnessing The Girl Friends, Incorporated grow into an influential national organization.   Appropriate to the social moors of the time, the group chose Bessie Bearden as their chaperone. Ms. Bearden was a prominent newspaper-woman and it was her son, the celebrated artist Romare, who designed the 1952 Chatterbox cover, which was dedicated to the New York Chapter’s 25th Anniversary.

​With nearly 50 chapters and over 1500 members, over the last 90 years the arms of friendship have grown to embrace a continent. Girl Friends have founded schools, headed colleges, earned all manners of academic and professional degrees, written books, been successful entrepreneurs, saved lives, been elected to Congress, appointed to judgeships and named to the cabinet of former US Presidents. They have also been devoted wives, mothers, sisters, aunts, Godmothers, friends and leaders of their communities.